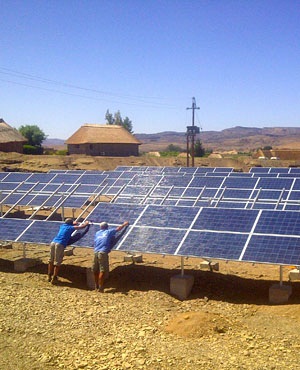 Source: fin24 IT IS unacceptable that South Africa remains in the energy stranglehold of the current unreliable power supply. Last week the nation was again on “a knife edge” and facing an “emergency” as Eskom asked large users to cut usage by a minimum of 10% to keep the system stable. South Africa’s energy safety-net remains at precariously low levels, causing consternation amongst consumers and investors alike. In the same week a widely-quoted AFP report described Eskom as “sclerotic” and a major inhibiting factor to economic growth. In a recent “state-of-system update”, public enterprises minister Malusi Gigaba said he was “fully aware of the disruptive element of power constraints, particularly on the economy” and claimed that the situation we are going through “is only but transient”.It will be anything but transient unless the government urgently acts to diversify the nation’s power supply to ensure energy security. If we want to grow our economy at the rates required by the National Development Plan (NDP), and which the Minister of Finance urged us to achieve in his budget speech, then we need to increase the adoption rate of renewable generation technologies which have a proven track record.Solar  Solar PV is the fastest growing power generation technology in the world, with a huge uptake in China, India, the US and Europe.Locally, there are three-to-four thousand MW of solar PV projects ready to be deployed to help solve the country’s energy crisis and, with the department of energy’s support and Eskom’s assistance, a further fleet of 75MW PV plants can be built and connected within 14 months.These plants are bid-compliant and ready to go. The only thing needed is financial support and we urge the South African government to give the final go-ahead to deploy an accelerated solar PV roll-out programme.This is by far the best option South Africa has.The current Integrated Resource Plan (IRP) for 2030 sets aside 8 400MW for solar PV.At the moment, the renewable energy procurement programme is delivering ahead of schedule, on budget, creating sorely needed jobs, injecting energy into the grid at prices lower than any other new generation source, and is delivering development benefits to parts of the country where economic stimulation is urgently needed. Added to this, Solar PV is clean and well suited to South African conditions with our consistently long hours of solar radiation.And it is getting cheaper to deliver each year. Capital costs are declining 8-10% per annum.The tariffs for PV have dropped from R2.65c/kWh in Round 1 (in 2011) to an average of R0.88c/kWh in Round 3 (2013), confirming the argument for an accelerated solar PV roll-out programme. A recent independent Frost & Sullivan report commissioned by Sapvia shows that solar PV is projected to achieve true cost parity with coal power (currently the cheapest per kWh) in terms of the levelised cost of energy (LCOE) in 2018.It will be the cheapest generating technology in SA by 2020 (R1.36kWh as against R1.69kWh for coal).And it carries none of the massive broader costs of coal and nuclear in terms of carbon emissions or water consumption.The REIPPP programme has seeded an industry worth R150bn to South Africa.It created 55 000 jobs across construction and operations in Solar PV alone.As the study suggests, “Solar PV has superior potential for job creation (especially for unskilled labour) and its ability to build and support local industries”.Solar PV plays a crucial role in our energy mix. It contributes to energy security at a time when our supply is badly constrained.It can replace the costly, diesel-fired, open cycle gas turbines (OCGT) during peak daytime loads.It doesn’t consume huge volumes of scarce water resources. It’s source is inexhaustible. It’s not exposed to commodity price volatility, inflationary pressures, environmental taxes and vulnerability to disruption at a single large point of supply.It is also modular, quick to install and relatively simple to deploy close to demand points, obviating the costs and power losses of long transmission lines. Solar PV is helping to drive a new path of industrial and manufacturing development.It’s a technology which can be rapidly deployed at scale, is viable all year round, is cheaper than new conventional power and can harness a free source of fuel.So, for the sake of our energy security and expediting economic growth, we must put in place an accelerated solar PV roll-out programme.  Eskom demands we slow our economy down because the utility’s fleet is showing its age and it has no clear workable solutions in place.Solar PV is the solution for this crisis and with large scale mobilisation and an accelerated pre-approved roll-out programme, the industry is ready to meet the challenge.  * Davin Chown is chair of Sapvia (South African Photovoltaic Industry Association)